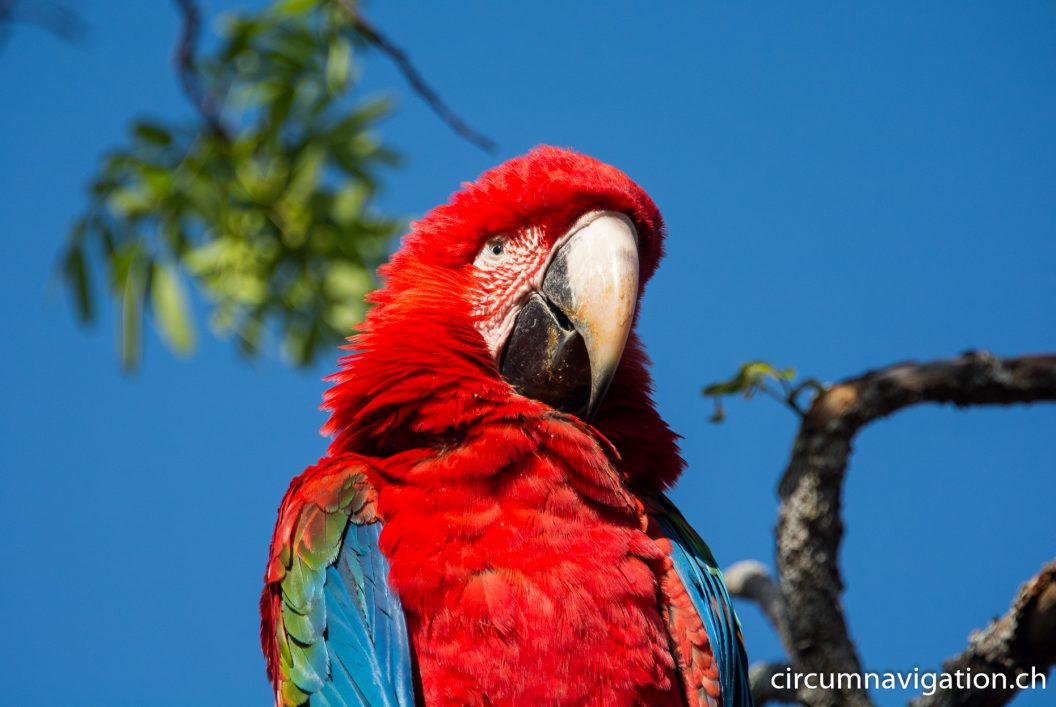 On Saturday, 28.8.2018, the visit of the Buraco das Araras was announced. The day before we registered for the tour at 8 o’clock. As a proverb says so aptly: “The early bird catches the worm!”

Maroni, the guide, arrived shortly after us and spoke a fair amount of English. We walked not even ten minutes on the way when we met on the crater rim on a observation tower. From afar we heard the cawing of the macaws. If these colorful birds were to sing as beautifully as they look, that would be too much for the good! When we arrived at the platform, we had an unforgettable sight: dozens and pairs of macaws hovered in the air in their magnificent plumage. On a tree, less than five meters away from us, there sat several couples who devoted themselves to feather care. What a picture! Normally one looks skywards for bird watching; Here we could look down on the birds that were flying along the crater rim.

At present, the macaws are breeding The females lay 1-4 eggs in three-meter-deep caves on the vertical crater wall. These nests are recovered by the same couple year after year and there are fierce battles for them. Only a maximum of two macaws reach adulthood. The others become prey to the birds of prey. The tucans are the biggest predators, followed by ibis and hawks Macaws are up to sixty years old and stay together for a lifetime. They were threatened here with extinction until they created this nature reserve twenty years ago. It is located on the site of a former fazenda (ranch). Their owners have realized that tourism can earn more money than soybeans.

We were amazed at what we saw in the next ninety minutes. It was a memorable experience. Unforgettable also because we finally bought a hammock made of leather. Every time we lie in it in the future, we will think back to this great morning!

Would like to see more? Have a look at our Clip to the Macaws.