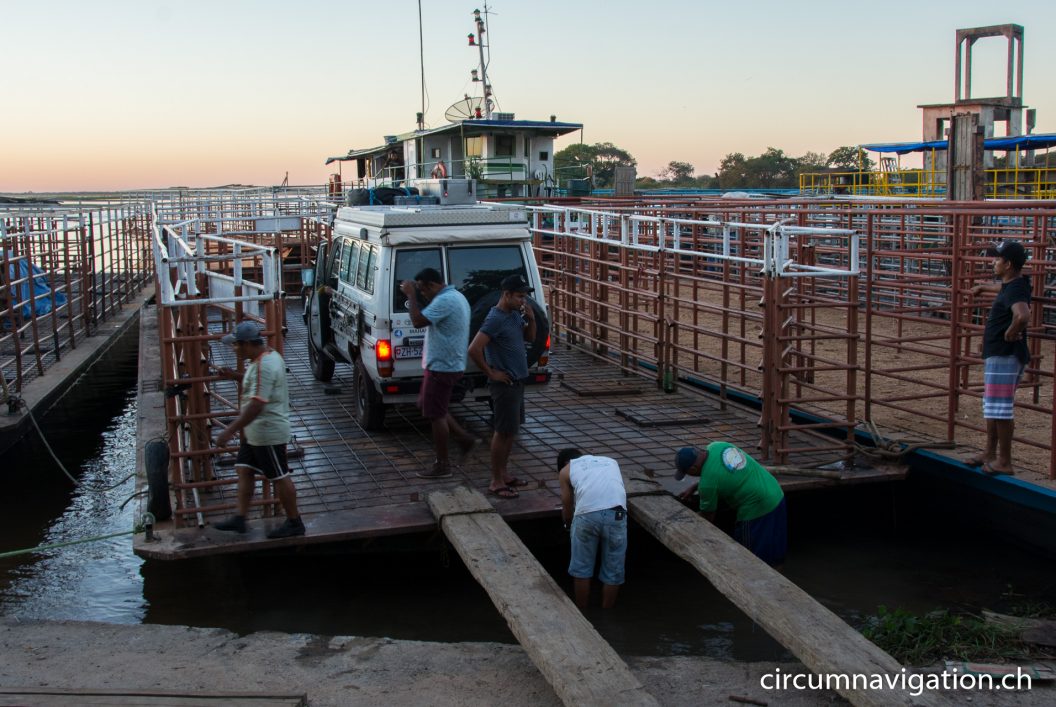 Tricky to get on the raft

On Thursday, 6.9.2018, at 5 pm, Cajacou picked us up at the Pousada in Corumbà. Brigitta had made purchases in the afternoon, so we went on the road again neither without beer nor vitamins! Once again, it was time to say goodbye to people who had come to our hearts in a short time. When will you see each other again? And do you see each other again? These are thoughts that go through our heads at such a moment.

At the landing place there was already a lot of activity. Several convoys were ready for departure and were loaded. Cajacou told us to stop on the sloping ramp and wait for him. A few minutes later he reappeared and pointed us to the pontoon, which was half a meter higher that were we stood! As a drive-on two thick wooden boards were brought over. They looked as if they would be able to carry Mahangu’s weight of about three tons.

I engaded the low gear and drove at a snail’s pace over the boards. Cajacou directed me and Brigitta filmed the whole scene from a safe distance in the event that … But that did not happen! Everything went well and soon I was on the pontoon with Mahangu. I put the car in gear, pulled the handbrake and locked the vehicle. Then we went back to the dock, where delicious meat kebabs were fried. We have been told it would be a while before all the pontoons are finished with loading. In the meantime, we would have time to drink a beer and have something to eat. Truck after truck unloaded Zebu cattle from the trucks, which were distributed on the pontoons. Men and women carried ice, beer, rice, pea and sugar sacks to the ships. Cajacou picked us up after five Brahma beer, three cigarettes and four meat kebabs later. Meanwhile it was 8.15 pm and dark.

We were led to the pontoon on which Mahangu stood. On a second were forty zebu cattle and a third was loaded with wood, a used gas stove, barrels, rice bags and hundreds of milk packs. We had a pontoon for ourselves! Brigitta prepared Mahangu for us to sleep. Then we watched as the captain steered the convoy into the open water. The next three days this raft would be our home.

We watched as the lights of Corumbà were swallowed by the night, after a few turns of river. At 9.30 pm, after one last look at the twinkling starry sky, we climbed into the sleeping bags. In front of us lay over 400 kilometers on the Rio Paraguay and Cuiabà until we arrive in Porto Jofre on Sunday. What will they bring us?