In the heart of the Grande Amburgo – in the engine room 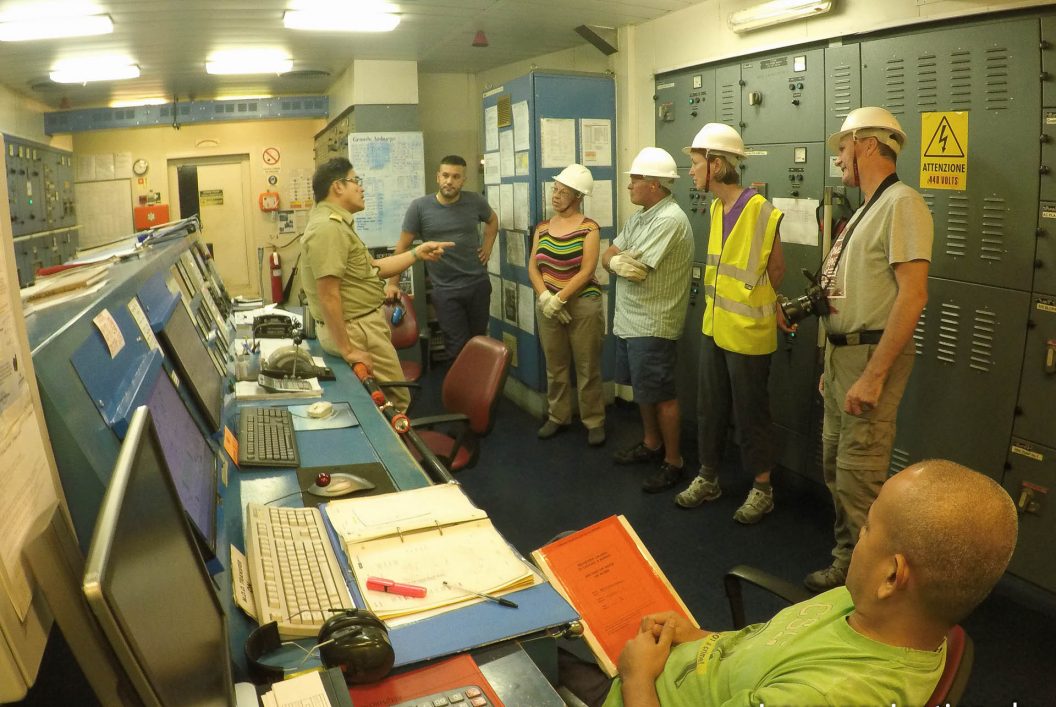 On 31.10.2017, we had the opportunity to visit the engine room. We had good footwear, helmet and ear muffs mounted before we were accompanied by the lift a few floors down. Nino, an Italian from Naples, who completed his training as Chief Engineer, accompanied us. The deeper we came, the noisier. With each step in the depth of the heat increased. Nino told us that it can be up to 40 degrees in the engine room. It was cooler in the control center, where it looked like a jumbo jet. Computer screens, consoles and gauges wherever you looked. A wonder that someone has the overview here!

We were shown how pumps, valves, motors and generators can be monitored and controlled at the click of a mouse. After the control room, from which the ship can also be controlled in an emergency, we went further into the depths. It was hot; The noise increased and would probably be unbearable without ear protection. Around us pipelines, generators, pumps and filters that it needs to produce fresh water, to keep the AB in operation or to recycle the heavy oil. Diesel and heavy fuel oil are stored in large tanks, which are pumped according to the conditions or fed to the engines.

Then we saw something that gave me special pleasure: the ship’s engine! It was a Sulzer 8-cylinder, two-stroke engine as Nino explained. (Many years ago, I promoted Sulzer marine engines!) A powerful drive shaft, as thick as a tree trunk, propels the propeller. Down below there was a weird noise, the explanations of Nino, were swallowed by this. This down here resembled a power plant in which electricity was generated. Or a factory hall where machine parts are made!

Wherever you looked pipes, pumps, generators and pounding engines. It smelled of oil and diesel. No daylight, no fresh sea air. Only infernal noise, stench and heat. I admired the men working under these conditions – mostly Filipinos. Without them, world shipping would not work. As little as our restaurant kitchens without staff from Sri Lanka. Or retirement and nursing homes without staff from the Third World!