Baptism at the equator 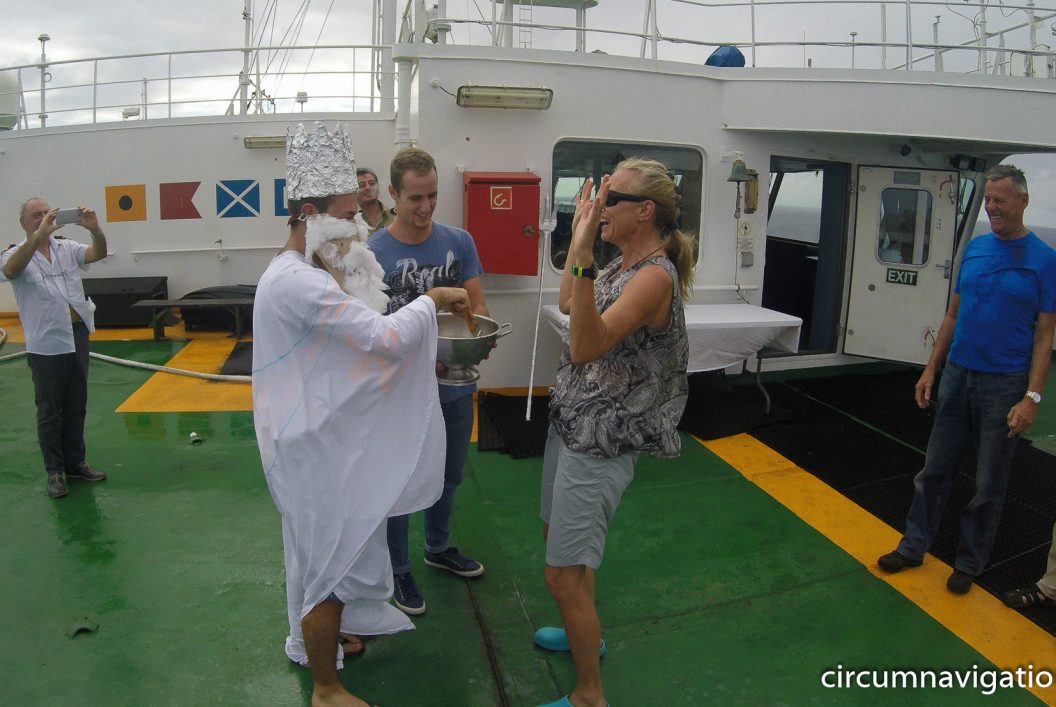 The passage from Dakar to Vitorià, in Brazil, would take seven days. 150 hours only water and sky! We were looking forward to that when we left Dakar harbor at 2am on Saturday, October 28th, 2017, heading west to southwest to Brazil. When I went on deck at three in the morning, the Grande Amburgo had already left the harbor, only the lights of Dakar still beckoning. The next morning, when we awoke, all we saw was blue. On the bridge, I saw that the automatic pilot was on course 210 ° and the machines were «full ahead». We would maintain this course for the next 2’400 nautical miles. Then there would still be over 2,000 nautical miles to the coast of Brazil!

We were all astonished that we did not see any fish on the crossing from Africa to Brazil. We stood for hours on the bridge and looked out on the deep blue Atlantic. Every now and then we thought we had seen a dolphin; but then it turned out to be white crests. All the more was the joy when, after two days and almost out of nowhere, a frigatebird appeared above the ship. Elegant and without a flapping of his wings, he circled over us. The Grande Amburgo plowed at 15 knots (about 30 km/h) through the water, but that was nothing compared to the speed of the bird. As suddenly as the frigatebird appeared, he took his leave. We were alone again. No other ship in sight, water to the horizon and three to four kilometers below us as the chart showed. The island of Fernando do Noroñha, which belongs to Brazil, was still over 500 kilometers, or 13 hours away.

On Monday, 30.10.2017, at 7pm, we crossed the equator. The captain invited us and the officers to the Equatorial Baptism on the bridge. A crew member dressed as Poseidon wore a Santa Claus beard and a three-pronged spear. He put that on our heads and baptized us. But that was not all. We were told to go outside where «Poseidon» was waiting for us. In his hand a basin with a chocolate drink, in which also a brush lay. With that we were brushed in, no wonder we all smelt of chocolate at the end of the ceremony. Then we were sprayed from head to toe with a fire hose. Now came the cozy part of the ceremony: we were offered sandwiches and red wine and the captain handed each of us a diploma that we passed the Equator. Next, we took a shower, put on some fresh clothes and smelled like spring again.