From Brasil to Argentina 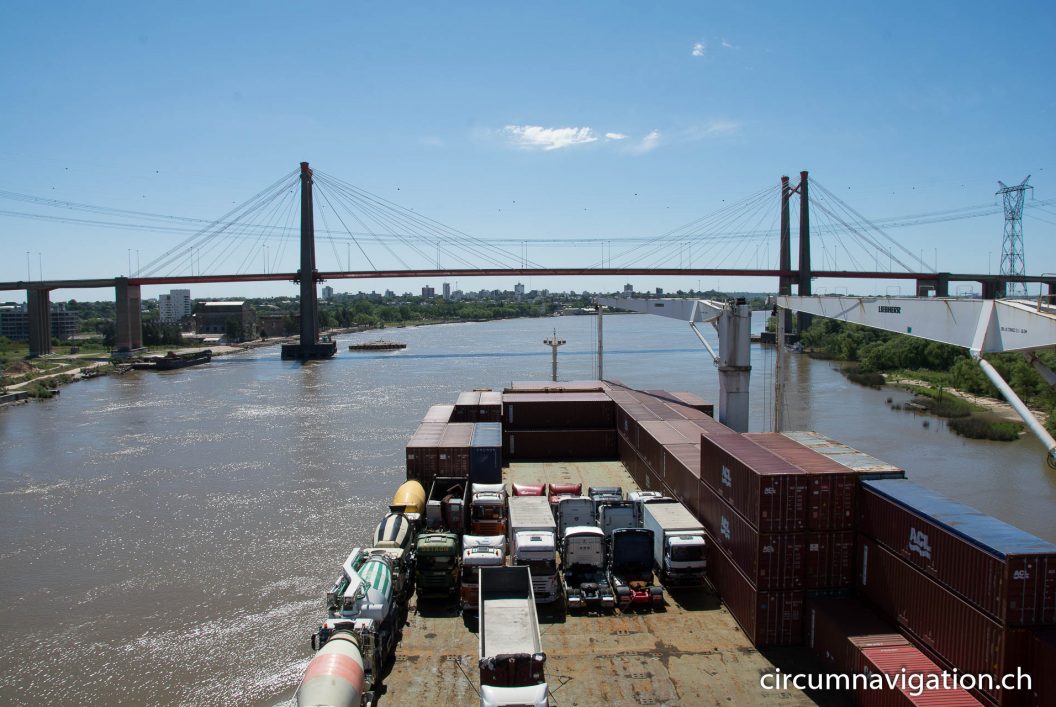 Zarate, 14.11.2017,19.25: What an eventful day today! In the morning we woke up in fine weather. Wind and waves had also returned to normal levels. After breakfast we went up to the bridge and looked at the blue, seemingly endless sea. Three hours later it was brown! This is a sign that we were in the huge bay of Rio de la Plata, where Montevideo, the capital of Uruguay, and Buenos Aires, the capital of Argentina, are located. Two hours later the silhouette of Buenos Aires appeared. Here too, in addition to the port facilities, it was above all the skyscrapers that caught our eyes. For more than an hour we sailed past this scenery. We passed on the port side the turnoff to the city harbor and continued to follow the buoys, which marked the way to Zarate.

And finally, we saw the entrance to the Rio Parana, which was supposed to lead us to Zarate, a good hundred kilometers or a five hours’ drive away. A narrow canal, only two meters deeper than our keel, led us through a beautiful swampy landscape that reminded us of the Estero del Ibero, an alluvial area in the province of Entre Rios. Or Botswana. (With such comparisons I always like to remember what we have already seen in our lives!) From a height of almost 40 meters we looked at a unique landscape. On both sides small rivers or lagoons, where herons were looking for prey. Then again small wooden shacks on stilts – weekend cottages of rich and less wealthy Argentinians. The rich, as the pilot told us, live on the right side of the river and the poor (he counted himself among them) on the left.

It was an unforgettable ride. There was always something to see: Beautiful landscapes, followed by rusty wrecks lying in the water. Or disintegrated factory buildings that are recaptured by the nature brick after brick. In the early afternoon we passed the bridge, which spans the Parana just before Zarate. The mast with the position lights had to be folded down for this passage – there were only five meters left up to the bridge! Shortly afterwards, the pilot was replaced by a colleague who guided the Grande Amburgo into the port of Zarate, where we made a 360° turn with the help of a tugboat. Then the Grande Amburgo was pushed to large concrete posts where it was moored. Lines were ejected and the heavy ropes were laid over the ropes. Half an hour later the ramp was extended. We had already observed this spectacle a few times and so we went back to the officers’ mess for a cold beer and a glass of cool white wine to make a toast to this day, to our crew and Zarate.

Zarate is the last port before we call Montevideo, where we should arrive on Friday. The date of arrival, however, depends on various factors. When can we unload? What will be charged? When do we have a free passage through the narrow channel of the Parana back to the Rio Plata. When is a pilot available? So, it is always a surprised and we take the days as they come.

Yesterday we prepared for a first leave ashore. As always, it took some time until we had passed the controls in the harbor were our passports were inspected. A taxi took us to the Plaza Mayor in the center of the city. From there we set off on foot to explore Zarate. The temperature here is currently a little over 30 degrees Celsius and it’s humid. We looked for shadow wherever we could. First of all, we went to the bank, Santander, where hundreds of people wanted to make their deposits – e-banking is still a foreign word! At an ATM – fortunately these are nowadays also available in Argentina – we withdraw cash with our Mastercard. After that we looked for a shop of Claro, an Argentinean telephone provider. But it wasn’t as easy as we thought to get a prepaid card. The procedure lasted over an hour. In a nearby restaurant we tasted a cortado (milk coffee) and checked if the internet connection worked. No!