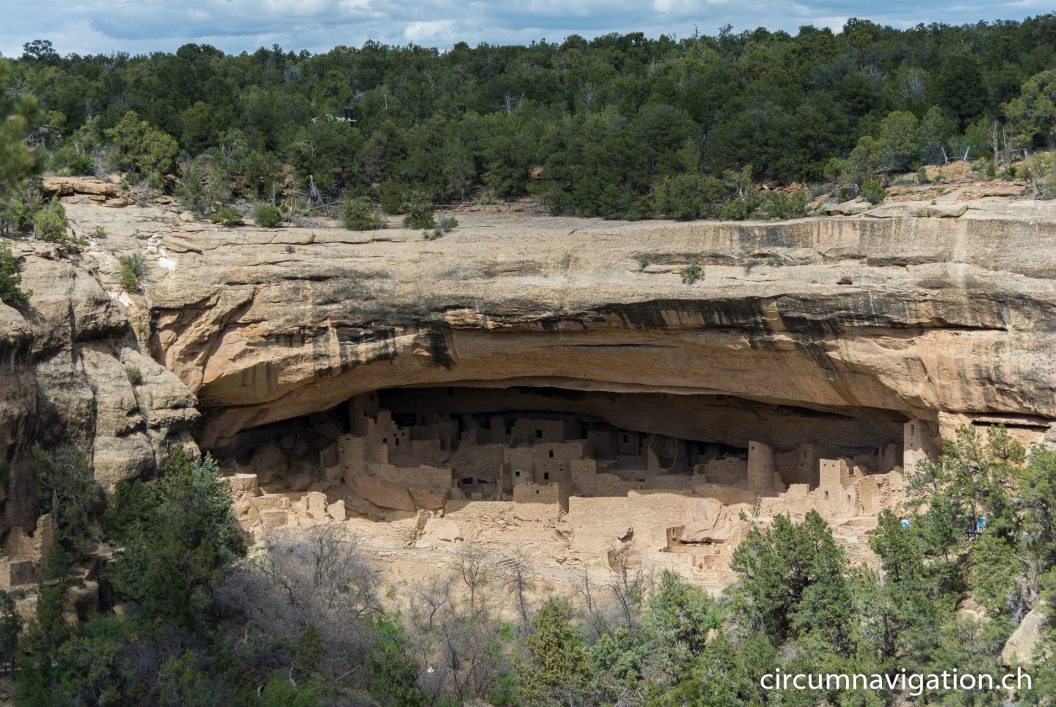 On April 21st 1919, we crossed the border between New Mexico and Colorado. Soon after, the landscape changed drastically. Horses and cattle stood on green pastures and rivers rushed through pine forests – the snow melt has started here.

A few days earlier, we visited the villages of the Chaco culture in New Mexico built over a thousand years ago. We had made acquaintance with this fascinating culture. It reached its peak between 1150 – 1300 AD. What has been happening in Southwestern America over this period of time is extraordinary.

One of the highlights of this lost culture is Mesa Verde in Colorado. On this plateau, at an altitude of more than 2,000 meters, the Puebla Indians built their settlements along a canyon under mighty rock overhangs or in large caves. That we were not the only ones who wanted to see this we realized quickly. They consoled us the next day to visit one of the highlights. (The Cliff Palace is accessible only when accompanied by a ranger.)

We used the first day to visit the settlements, which can be visited unaccompanied. What we saw was spectacular. Protected by mighty caves, houses and towers up to thirty meters high were built. Or circular kivas, places where spiritual or other events took place. In order to reach their dwellings, the inhabitants had to climb over rock walls and via ladders into the depths. Or high, if they tended their fields on the rock plateau. Here they grew beans, corn and pumpkins. The water came from springs or streams near the dwellings. The meat supplied rabbits, turkeys and game, which was hunted with bow and arrow.

Why the inhabitants left their homes after three hundred years is still a mystery, as there are no written records. Researchers believe it was a drought lasting several decades that made people to move away. Whatever the reason: what these people left behind testifies to their creative abilities as builders and artists!