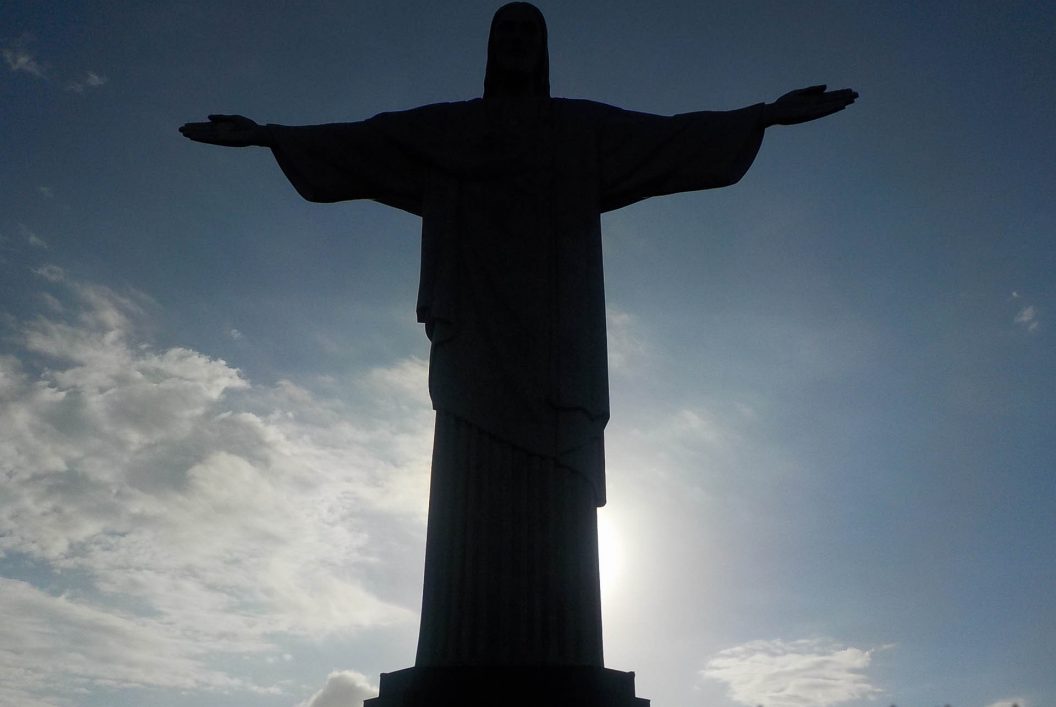 On 7.11.2017, after three days in the port of Vitorià, the Grande Amburgo, left with a new captain on board. Instead of 24 hours as planned, the involuntary stay had lasted 72 hours. (Our former captain is in the hospital of the city where he was operated before being flown back to Italy.) The new captain, a handsome man with 30 years of experience, took command. He wasn’t on board for two hours when we released the lines and left the port.

On November 8, 2017, at 11.30 clock, appeared in front of the portholes of our dining room, the silhouette of Rio. Soon everyone was on the upper deck to take a look at the famous Corcovado. Here stands the statue of Cristo Retentor, who holds his blessing hands over Rio. (A few years ago, a lightning hit him – not a good sign!) We shipped by on the most famous beach in the city – on the Copacabana. However, we were too far away to discover a Carioca (inhabitant of Rio) in her Fil de dente (dental floss = tightest thong).

At 1 pm we were picked up by Hamilton, a Carioco, who was supposed to do a sightseeing tour with his bus. The first was the Maracaña Stadium, where the Brazilians lost 7-0 to Germany in 2014. No Brazilian likes to remember that! I’m kidding him as Hamilton had enough humor to accept that. The next destination was the most famous 800 meters of street in Rio – the Sambodrom of the carnival. Hamilton let us take a look behind the scenes – the preparations for the next carnival were already in full swing. Much of it is done in secret – the mystery about subjects and costumes will not be solved until the last possible date! Carnival and its worldwide marketing have become a real industry, giving thousands of Carioca’s work and merit.

Hamilton did not miss to show us the second oldest church in Brazil (Mosteiro de São Bento) – the oldest in Ouro Preto – of Rio, built by the Portuguese conquerors in 1617. Splendour where the eye looked. Gold and silver, which could have been invested at the time for something better – for example, to enable the poor to get a better education. But who had an interest in it? An uneducated population can be better controlled than a well-educated. The present Brazilian government under Temer, which, like the old government under Dilma Rouseff and Lula da Silva, is facing a headwind. (Hamilton told us that it is possible that the military might take over the power to control the ubiquitous corruption – something that is undesirable for the country!

Instead of the second church, we would have preferred to see the Copacabana. But Hamilton wanted to show us the largest church in Rio, which can accommodate 2’500 people. (Whether it’s ever full?) Next, we were drove to the Escaderia de Selaron. It is the life’s work of the Chilean artist, Jorge Selaron, who began collecting tiles from all over the world in 1990, thus decorating this public staircase. Meanwhile, tiles from over 150 countries can be seen; the staircase has become a tourist attraction. The artist himself, who worked for free and for years on this staircase, has taken his own life a few years ago. We climbed up and down the stairs – a fitness training after the many days on board. (We have a small fitness room on board. But I’m not a friend of closed rooms, so for the last three weeks I’ve limited myself to ping-pong and a few morning exercises on the upper deck. True to the motto of Winston Churchill, who said that sport is the deadliest thing in the world!

Then we went to the Corcovado. At the “valley station” there was a crowd like in Switzerland on the Jungfraujoch. People of all nationalities and from all over the world come here to see the statue of Christ. The view from up here is even more beautiful. In contrast to our first visit in 2006, we had the best weather! What a bustle up there – like when the temple of Babylon was built, if it ever took place! We spent half an hour before we went back down.

Hamilton, whose driving style resembled that of the Formula 1 driver with the same name, drove us to the beach of Copacabana. It lay far and cleanly in front of us, but by now the sun had set and the beach beauties were no longer to be found. Too bad! On our way back to the port we stopped at a churrasceria where we ate the best meat in town (according to Hamilton). We ignored the side dishes (rice (!), bananas, maize and bread). The beer was served in a small glass and with lots of froth – we had ordered a large one. In the meantime, I have been practiced in sign language and so I had no trouble to show to the Camarero (waiter) that we would like to have a full glass. I don’t care about foam!

At 21.45 we were back at the harbor. Back at the Grande Amburgo a member of the crew greeted us. The end of this unforgettable day was a sip from the bottle, which is marked with Jacobi. It contains a German brandy, which was aged for a few years in French oak barrels. Tudo bem!