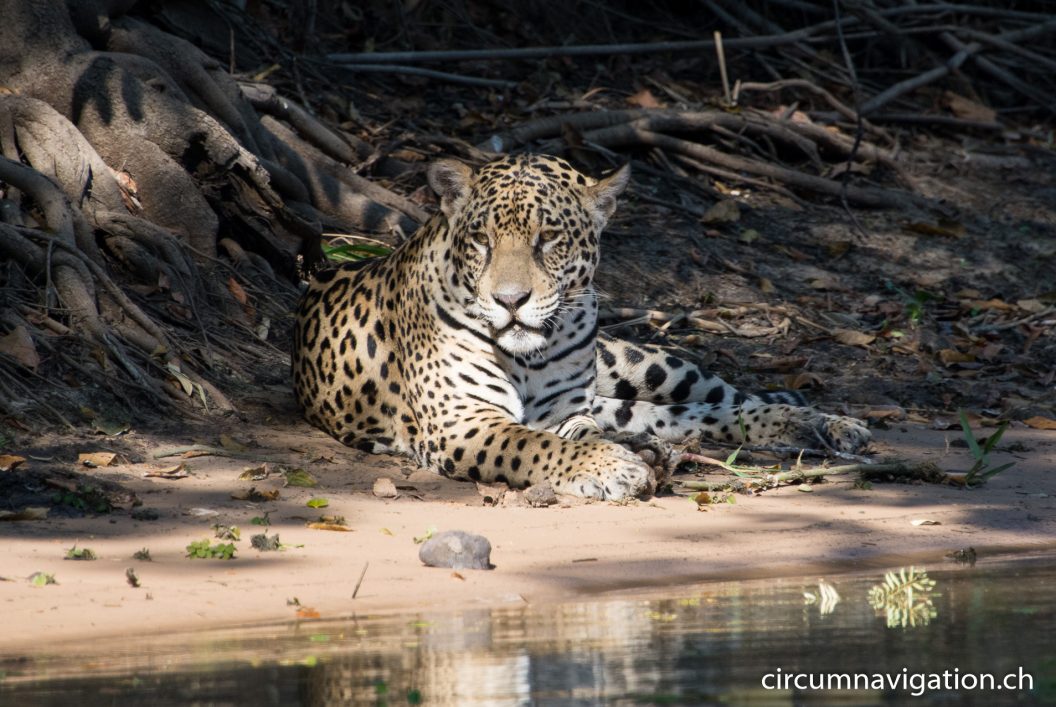 It was dark, the stars were sparkling and the mosquitoes were still asleep when we got up. At 6 o’clock our tour started with a fast motorboat, in which two Frenchmen and the guide sat besides us. At 35 km/h, the boat shot over the sluggish and brown flowing Rio Cuiabà. Three quarters of an hour later we turned into a tributary and followed it for another quarter of an hour. Then we came across the first Jaguar. What a splendid specimen! One would have thought that he was paid for posturing, because he showed himself from his best sides.

On the journey we marveled at herons, cormorants, ibises, jabiru storks and giant kingfisher sitting in the trees and giant otters swimming and playing in it. Then boats appeared on the right bank of the river, bobbing along the shore. We knew what that meant: Jaguars. This time it was a mother and her cub. They sat above the bank and then trotted downstream through the bushes. What a surprise when they got into the river and drifted. On a sandbank, the two jaguars went ashore, shook themselves, trotted a few meters further and went into the water again. That jaguars are very good swimmers, we realized when they crossed the river! You could only see the heads sticking out of the water.

Further upriver was another meeting with these beautiful big cats. Two young males were playing on the side of the river. They also got into the water and swam to the opposite side of the river. Full of unique impressions we then drove back to Porto Jofre for lunch. The buffet left us mouth watering. For dessert there were candied fruits, Dulce de Leite (caramel cream!) and whipped cream! After a short siesta we went at 2pm to the pier for the second tour on this day.

We whizzed upriver and then turn off into the Rio Piriqui. An hour later we met another Jaguar. He took a sunbath on a sandbank and seemed to be waiting for us. After an hour of Jaguar-watching, our guide gave the signal to continue. What else did he want to show us? It was the seventh (!) jaguar we saw that day. We watched him for over an hour from a very close distance. Had Tijuné not told us to return, we would probably still be watching…

About Jaguars: They belong to the family of big cats. They are endangered and were hunted in Brazil until the eighties of last century. The biggest danger today is the loss of their habitat. 1-7 Jaguars in the Pantanal share an area of ​​one hundred or more square kilometers. Today, the jaguar is only to be found in Central and South America. Jaguars are loners and like all big cats – with the exception of the lions – only come together to mate. They are opportunists and feed in Brazil’s Pantanal especially on capybaras, tapirs, caimans, armadillos but also anteaters. Their preference for turtles, caimans, fish and capybaras is probably the reason why the jaguar prefers to live in the proximity of waters. (Source: Wikipedia)

Would like to see more? Watch the Clip to our Jaguar sightings.