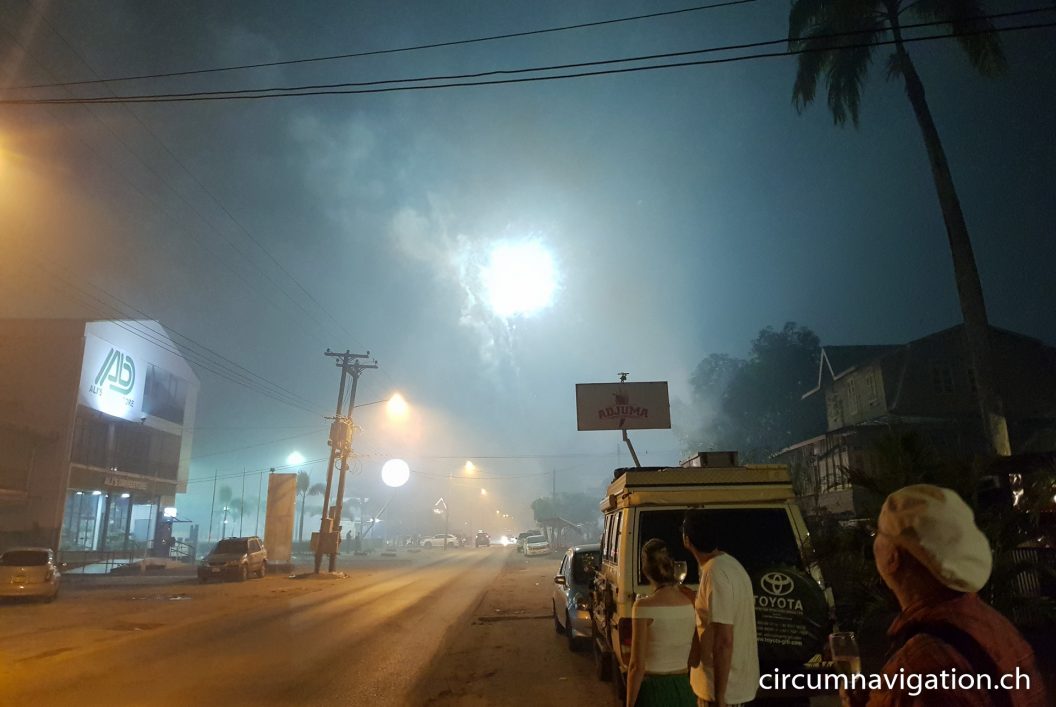 We reached Paramaribo, the capital of Suriname, on 27th December 2018 over the mighty bridge that spans the Surinam River. In the early morning we had crossed the Maroni River with a car ferry and left French Guiana behind us. On the other side, it was no longer French but Dutch spoken. (Suriname was a Dutch colony until 1975.)

René, a friend from old days and from Zurich, also landed in Para (aka Paramaribo) a few days ago. Together with him and his partner, we wanted to celebrate New Year’s Eve and also explore the city. We took a long walk through the old district. Here are pretty houses and the famous cathedral. Everything exudes Dutch coziness. The President’s Palace, where we strolled past seemed completely unguarded. (Desiré Bouterse, the president, seems to be sure that no one wants to kill him.  Amazing, knowing that he was charged with drug trafficking in Holland and had a few of his compatriots killed!)

At 6pm it was as if the war broke out. Violent noise like gunfire violated our eardrum. Fireworks rose in the sky and turned the night into day. There was a roar, bollards and bangs. But we were warned and had mounted earplugs. The noise reached its peak at midnight. The air was filled with sulfur and other burning smells! The cars that drove past had hazard and fog lights on.

We celebrated New Year with a glass of Sparkling Wine! A hearing test this morning showed that our eardrum has survived the noise attack without damage!