US PRESIDENTS IN THE FOG 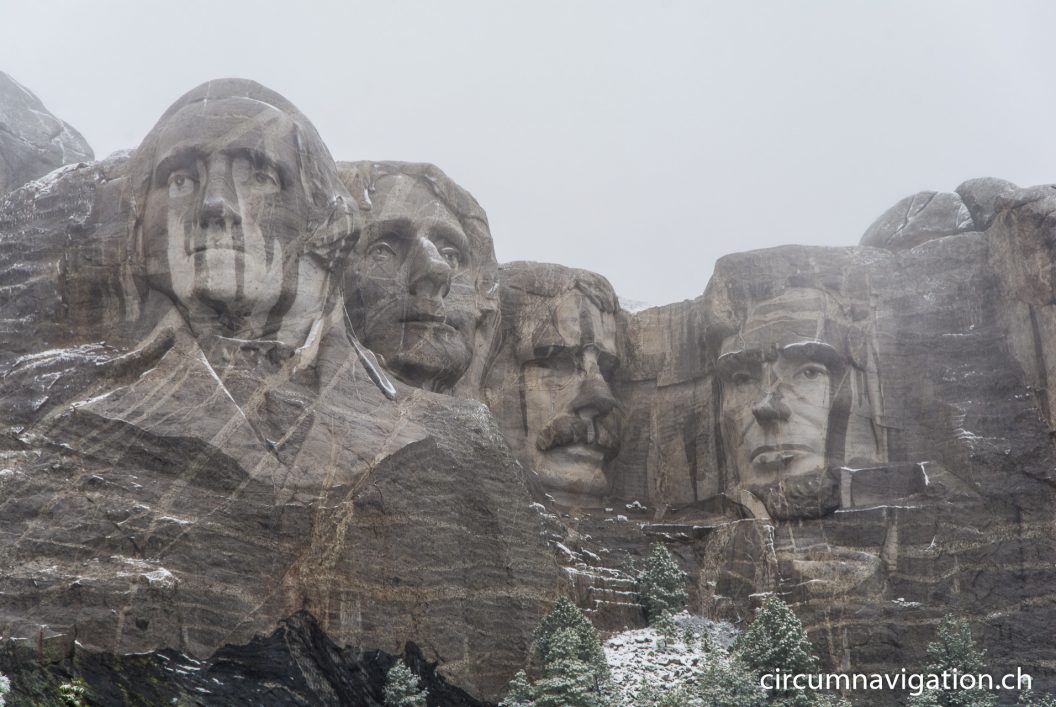 When we woke up in a State Park at Mt. Rushmore, South Dakota, on May 20th, five inches of snow lay on the hood of our Toyota. Inside, the thermometer showed 5 °C. While Brigitta was preparing breakfast and a hot coffee, I shoveled snow from the solar panels. Somehow it reminded me a lot of the winter at home!

At 10 o’clock we had an appointment with Etta and Stefan at the Visitor Center. They have been on the road for 18 months with their VW Bus with the fancy name GoGo Brunhilde. It was our sixth reunion; we met them as well in Uruguay, Argentina and Chile. But we didn’t expect it to take place during snowfall and fog. The joy of reunion was great, though they did not see the heads of the four US presidents – Washington, Jefferson, Roosevelt and Lincoln. When they arrived one hour late, except for fog, nothing was seen anymore. (Once more the wisdom came true: «The early bird catches the worm.»)

At 10 o’clock we caught a glimpse of the twenty-meter-high heads before they were enveloped in fog. Incredible what 400 workers created with dynamite and jackhammer under the direction of the Danish-born sculptor Gutzon Borglum between 1927-1941. Around 450,000 tons of rock were blown out of the mountain. When Gutzon Borglum dies on March 6th 1941, his son Lincoln oversees the work that ends in the same year. Since then, four US Presidents serenely look down from Mt. Rushmore on the approximately three million visitors a year from all over the world. Including four Swiss on this day!

PS. For heaven’s sake future visitors don’t have to expect that Donald Trump is looking from Mt. Rushmore!